The Axfood Group is exposed to financial risks, which are described under the respective type of risk below. Axfood has a Group-wide finance policy that regulates the delegation of responsibility on financial matters between the Board, the CEO, the CFO, Group Treasury and other Group companies.

The Group’s external financial management is centralized in the central finance department of the Parent Company, Axfood AB. Group Treasury reports monthly to the CFO with a follow-up of the finance policy. The same report is also presented to the Board four times a year.

Refinancing risk is defined as the risk that the Axfood Group at any given time cannot finance or refinance the Group’s operations, or that it can only do so at a considerably higher cost. Responsibility for the Group’s procurement in central financing matters rests with Group Treasury. The Group’s external financing from credit institutions (mainly banks) is conducted by the Parent Company, while subsidiaries finance their operations through the central Group account systems.

To limit the risk and the potential financial loss associated with the Axfood Group’s inability to finance the Group’s operations at any given time, a minimum permissible average remaining duration of 12 months has been set for the Group’s credit facilities. In addition, Axfood shall ensure that a maximum of 25% of requisite credit facilities falls due within 12 months. The guiding principle for the use of external credits, including leasing, shall be the financial cost taking into account the risk limitation rules laid out in the finance policy.

The Axfood Group’s investment policy aims to ensure the Axfood Group’s ability to pay in the short and long term. Further, the investment policy’s purpose is to reduce the Group’s external borrowing as much as possible by coordinating the management of surplus liquidity within the Group and to achieve the best possible balance of net financial income and expense within the framework of this policy. Investments may only be made in highly liquid instruments with low credit risk, i.e., investments that can be converted to cash and cash equivalents at any given point in time. As per 31 December 2019 the Axfood Group had only account balances in Swedish banks with a minimum rating of A– according to Standard & Poor’s, which are approved counterparties in the finance policy.

The effect on interest income during the coming 12-month period of a one percentage point increase or decrease in interest rates on interest-bearing assets amounts to SEK +/– 3.8 m (9.3).

As per the end of the reporting period, a 1 percentage point change in interest rates would not entail any significant change in the fair value of financial assets.

During the coming 12-month period, a 1 percentage point increase/decrease in the interest rate on interest-bearing liabilities would amount to SEK +/– 59.3 m (5.2).

The Axfood Group’s finance policy prescribes that 100% of orders are to be hedged at the time the order is placed. In addition, currency flows attributable to overheads that are judged to be of a permanent and continuous character shall be hedged to:

Currency exposure to investments in non-current assets are hedged according to the scale above unless the Board has decided on a different handling. Such a decision has been made regarding the investment in automation with Witron, entailing that hedges have been taken out as follows:

The hedge scale above entails that 52% of the remaining contract value on the balance sheet date is hedged.

The Parent Company did not have any exchange rate exposure during the year. 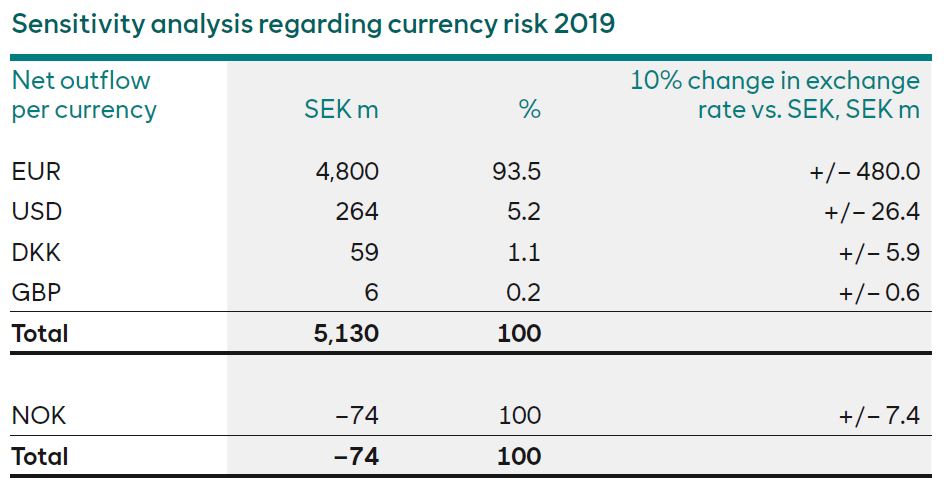 The sensitivity analysis above shows a hypothetical impact on cash flow and profit before tax, and before taking currency hedges into account. Currency hedges are always taken out no later than at the time orders are placed, and the hedge rate is always coupled to the respective orders. Based on this value, the price in stores is then determined for the respective products.

Of the reported fair value in EUR, SEK –42 m (–) consists of hedging for the investment in automation. The reported values of total hedge reserves are presented in the summary pertaining to changes in shareholders’ equity. The ineffective portion of cash flow hedges that has been recognized in profit for the year amounts to SEK – m (–).

In the Axfood Group, credit risks and credit losses are mainly attributable to trade receivables, although some risks are coupled to a few minor guarantee commitments. The Group has drawn up a credit policy that stipulates how customer credits are to be handled. The credit policy stipulates, among other things, the conditions for credit assessment, credit monitoring, and for the handling of demands for payment and insolvency. The Group’s customers undergo a credit check, whereby information about the customer’s financial position is obtained from various credit reporting agencies. In addition, limits are set individually per customer, and security is obtained, such as bank guarantees and chattel mortgages. Through coordination of credit monitoring and its handling of security within the Group, Axfood ensures that its risk exposure and thus its credit losses are kept at a commercially acceptable level.

Financial assets are reported in the statement of financial position after deducting provisions for expected credit losses. There is no concentration of credit risks, neither through exposure to individual borrowers nor groups of borrowers whose financial situation is such that it can be expected to be affected in a similar manner by changes in the external environment. The Parent Company did not have any external credit risks at year-end.

Trade receivables are measured at amortized cost and are covered by the simplified model for credit provisions.

The Group has prepared a loss reserve matrix to measure expected credit losses for trade receivables. The matrix is based on an analysis of actual bad debts during the last three years and is broken down into retail and wholesale companies. The provision for expected credit losses amounts to SEK 6 m, of which SEK 5 m pertains to trade receivables that are longer than 90 days past due.