The food retail sector is a large employer, providing a livelihood for more than 100,000 people. Young people account for roughly a fourth of these. In the countryside, grocery stores often serve as a community hub, offering in addition to groceries, also pharmacy, post and banking services.

The grocery sector is generally less sensitive to economic swings than other retail sectors. It mirrors the population trend in general and is driven primarily by population growth and inflation. According to the Swedish Food Retail Index, the Swedish food retail market grew by 3.1% in 2019, and according to the Swedish Food Retailers Federation, growth for e-commerce
was approximately 22%. Estimates indicate that e-commerce accounts for approximately 2% of the food market.

The Swedish Trade Federation forecasts that the industry will change faster in the next ten years than during the last fifty, owing to digitalization and consumers’ changing habits and opportunities.

With Axfood’s House of Brands strategy, the respective food concepts can adapt and meet the distinct needs of their customers. Through attention to every detail in operations – from the assortment, purchasing and logistics, to the interaction with customers in all channels – Axfood is staying attuned to its customers and continues to develop relevant offerings and concepts. 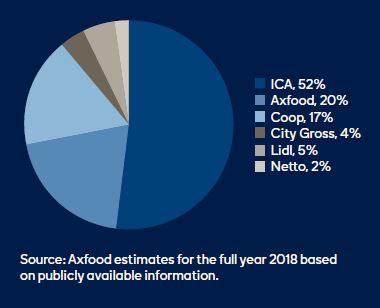