The Annual General Meeting (AGM) re-elected all of the Company’s board members and elected Christian Luiga as a new director. The AGM resolved, among other things, to pay a dividend of SEK 7.25 per share and to implement an additional long-term incentive programme.

The Annual General Meeting of Axfood Aktiebolag (publ) was held on Wednesday, 18 March 2020, in Stockholm.

Dividend
The AGM resolved in favour of a dividend of SEK 7.25 per share. The dividend amount will be divided into two payments, of SEK 3.75 and SEK 3.50, respectively. The record dates to receive dividends are Friday, 20 March 2020 and Friday, 18 September 2020. Dividends are expected to be paid out on Wednesday, 25 March and Wednesday, 23 September 2020.

The AGM resolved to implement a long-term share-based incentive programme (LTIP 2020). The programme is in accordance in all essential respects with the long-term share-based incentive programmes that the 2019 Annual General Meeting resolved to establish, with the change that participants in Category 2 can allocate 1,250 Savings Shares to LTIP 2020, compared with 850 Savings Shares in the previous programme.

LTIP 2020 includes approximately 75 employees, consisting of the members of Axfood’s Executive Committee, members of the management teams of Axfood’s subsidiaries, and certain other persons in management functions. Participation in LTIP 2020 requires a personal shareholding in Axfood. After the set vesting period, the participants will be granted shares in Axfood free of charge provided that certain conditions are met. These conditions are: continued employment in the Axfood Group during the vesting period, that the individual continues to own shares in Axfood during the same period of time, and that certain performance targets have been met, which are related to the total shareholder return (“TSR”) on the Company’s shares, the Company’s TSR in relation to the SIX Return Index, the Axfood Group’s total average sales growth contingent upon achievement of a certain average EBIT margin, and a higher portion of sales of sustainability-labelled products. The maximum number of shares in Axfood that may be granted under LTIP 2020 shall be limited to 310,000, which corresponds to approximately 0.1% of the total number of shares and votes outstanding in the Company. Based on an unchanged share price during the term of the programme, a three-year vesting period and certain other assumptions, the total cost for LTIP 2020 including social security costs is estimated to be approximately SEK 51.0 m, which on a yearly basis corresponds to approximately 0.2% of Axfood’s total personnel costs during the 2019 financial year.

Purchases of own shares and transfers of treasury shares

The AGM also resolved to authorize the Board to, on one or more occasions during the period until the next Annual General Meeting, decide on purchases of a maximum of 310,000 of the Company’s own shares. Purchases of shares shall be made on Nasdaq Stockholm and at a price per share that is within the registered price interval at any given time (the spread). Purchases may be made for the purpose of securing the Company’s obligations arising out of LTIP 2020 and any other share-based incentive programmes that may exist at any given time pursuant to a resolution by a general meeting of shareholders.

Further, the AGM resolved to transfer a maximum of 310,000 shares in Axfood to participants in LTIP 2020 who, in accordance with the terms of LTIP 2020, are entitled to receive shares.

Employee purchases of shares in subsidiaries
The AGM resolved that employees of the Axfood Group shall be given the opportunity to purchase shares in store companies in Hemköpskedjan. Every Annual General Meeting of Axfood since 2009 has given its support for employees of Hemköp stores to have the opportunity to purchase shares in store companies within Hemköpskedjan in the aim over the medium term to be independent franchisees. The AGM now expands this opportunity also to Tempo stores for the purpose of further developing and expanding the Tempo chain, among other things with respect to the number of stores and geographic spread.

With respect to Hemköp stores, the proposal entails that Hemköpskedjan AB initially transfers the operation of a store to a newly formed, wholly owned stock company. With respect to Tempo, the proposal entails that Hemköpskedjan AB in a first step acquires or establishes such a store that is to be operated within the Tempo chain, since the Axfood Group currently does not own any Tempo stores.

The persons who shall have the right to purchase shares are store managers (presidents) of store companies that are operated and/or established within Hemköpskedjan. The resolution covers a maximum of ten stores and applies for the period until Axfood’s 2021 Annual General Meeting.

Resolution to amend the Articles of Association
The AGM resolved in favour of amending the Company’s Articles of Association with respect to notification regarding the right to vote at general meetings, deletion of resolution on instructions for the Nominating Committee and resolution on guidelines for senior executives as obligatory items of business at every Annual General Meeting, and editorial simplification and clarifying changes. 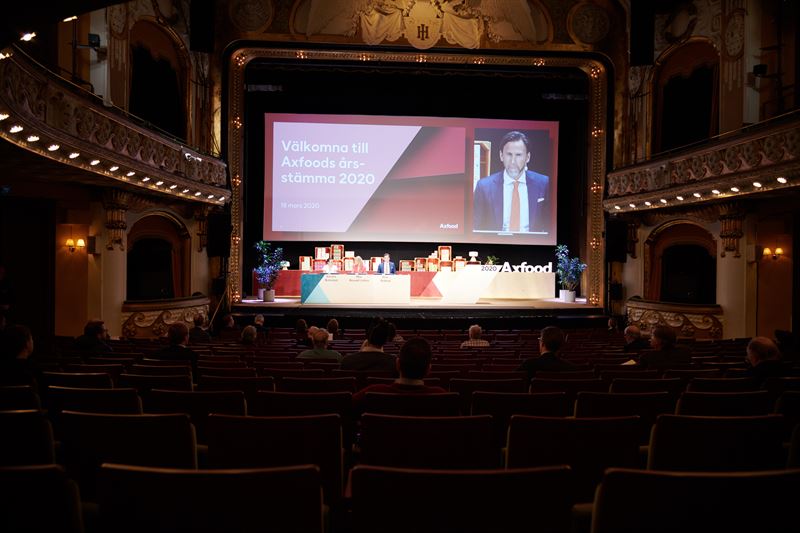